“How to” and “how not to” debate. Mrs. Dobell and Mr. Mogg debate KIPP’s no sandal policy.

Directions: You will need to take into consideration the roles and responsibilities of each speaker and the function of their speeches in a debate.

These speeches are presented by the first Team A and the first Team B speakers. The main responsibility of this speaker involves: introducing the topic in an attractive and interesting manner, defining the main terms (like racism). You can also outline what sources your teammates are using.

These are usually the last speeches in a debate and their function is to summarize the main points and conclude the debate for each side. The last speakers have the last opportunity to demonstrate to the judge(s) or the audience why their team should win the debate and finish their respective speeches with a powerful conclusion.

Refutation (Taking notes of what has been said and what has not by both sides.

With the exception of the speaker opening the debate (1st speaker) all speakers participating in a debate should be ready to not only support the arguments prepared by their teams (through the process of research, argument and debate case development) but also critically respond.

Directions: You will be arguing your side, persuade teammates. Take time to make sure you understand your side of the argument and are prepared for what the other side will say (this will help you be better prepared for the rebuttal).

Presenters will be able to debate their side of the issue using evidence from primary source documents. Each team will give a opening, rebuttal and closing argument.

You are the Judge. You are responsible for judging the teams during the debate. Directions: before and after each speech is given take time to fill in the appropriate section.  Remember to show your teammates the same respect you expect when you are presenting. 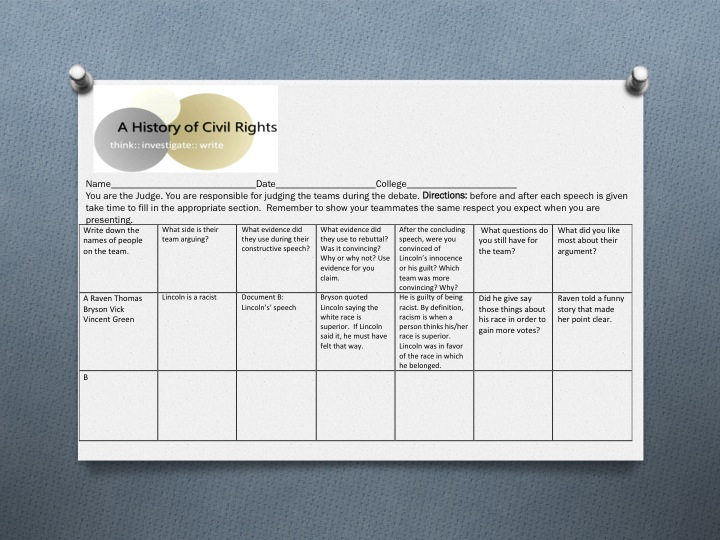